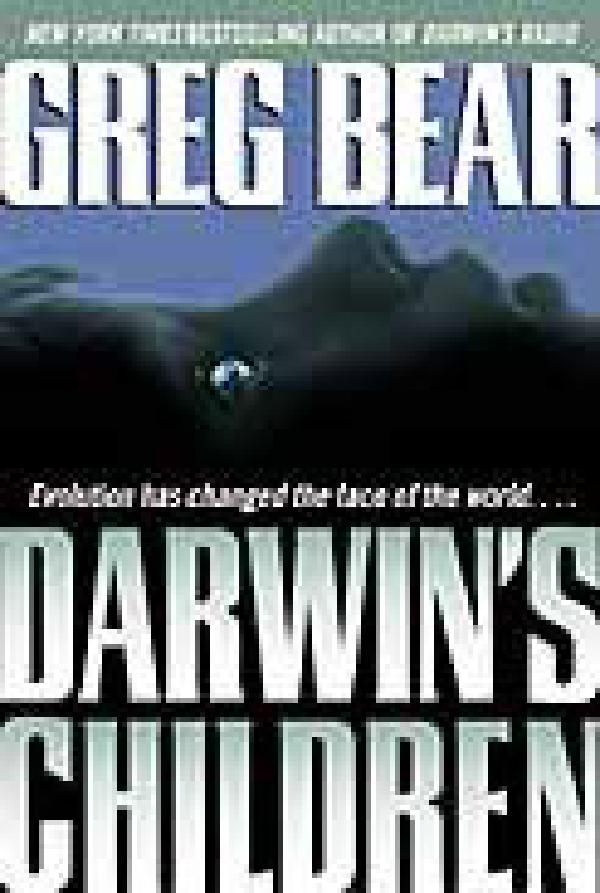 Greg Bear’s powerfully written, brilliantly inventive novels combine cutting-edge science and unforgettable characters, illuminating dazzling new technologies–and their dangers. Now, in Darwin’s Radio, Bear draws on state-of-the-art biological and anthropological research to give us an ingeniously plotted thriller that questions everything we believe about human origins and destiny–as civilization confronts the next terrifying step in evolution.

A mass grave in Russia that conceals the mummified remains of two women, both with child–and the conspiracy to keep it secret . . . a major discovery high in the Alps: the preserved bodies of a prehistoric family–the newborn infant possessing disturbing characteristics . . . a mysterious disease that strikes only pregnant women, resulting in miscarriage. Three disparate facts that will converge into one science-shattering truth.

Molecular biologist Kaye Lang, a specialist in retroviruses, believes that ancient diseases encoded in the DNA of humans can again come to life. But her theory soon becomes chilling reality. For Christopher Dicken–a “virus hunter” at the Epidemic Intelligence Service–has pursued an elusive flu-like disease that strikes down expectant mothers and their offspring. The shocking link: something that has slept in our genes for millions of years is waking up.

Now, as the outbreak of this terrifying disease threatens to become a deadly epidemic, Dicken and Lang, along with anthropologist Mitch Rafelson, must race against time to assemble the pieces of a puzzle only they are equipped to solve. An evolutionary puzzle that will determine the future of the human race . . . if a future exists at all.

A fiercely intelligent, utterly enthralling novel of adventure and ideas, genetics and evolution, a fast-paced thriller that is grounded in the timeless human themes of struggle, loss, and redemption, Darwin’s Radio is sure to become one of the most talked-about books of the year.

Eleven years have passed since SHEVA, an ancient retrovirus, was discovered in human DNA—a retrovirus that caused mutations in the human genome and heralded the arrival of a new wave of genetically enhanced humans. Now these changed children have reached adolescence . . . and face a world that is outraged about their very existence. For these special youths, possessed of remarkable, advanced traits that mark a major turning point in human development, are also ticking time bombs harboring hosts of viruses that could exterminate the “old” human race.

Fear and hatred of the virus children have made them a persecuted underclass, quarantined by the government in special “schools,” targeted by federally sanctioned bounty hunters, and demonized by hysterical segments of the population. But pockets of resistance have sprung up among those opposed to treating the children like dangerous diseases—and who fear the worst if the government’s draconian measures are carried to their extreme.

Scientists Kaye Lang and Mitch Rafelson are part of this small but determined minority. Once at the forefront of the discovery and study of the SHEVA outbreak, they now live as virtual exiles in the Virginia suburbs with their daughter, Stella—a bright, inquisitive virus child who is quickly maturing, straining to break free of the protective world her parents have built around her, and eager to seek out others of her kind.

But for all their precautions, Kaye, Mitch, and Stella have not slipped below the government’s radar. The agencies fanatically devoted to segregating and controlling the new-breed children monitor their every move—watching and waiting for the opportunity to strike the next blow in their escalating war to preserve “humankind” at any cost.