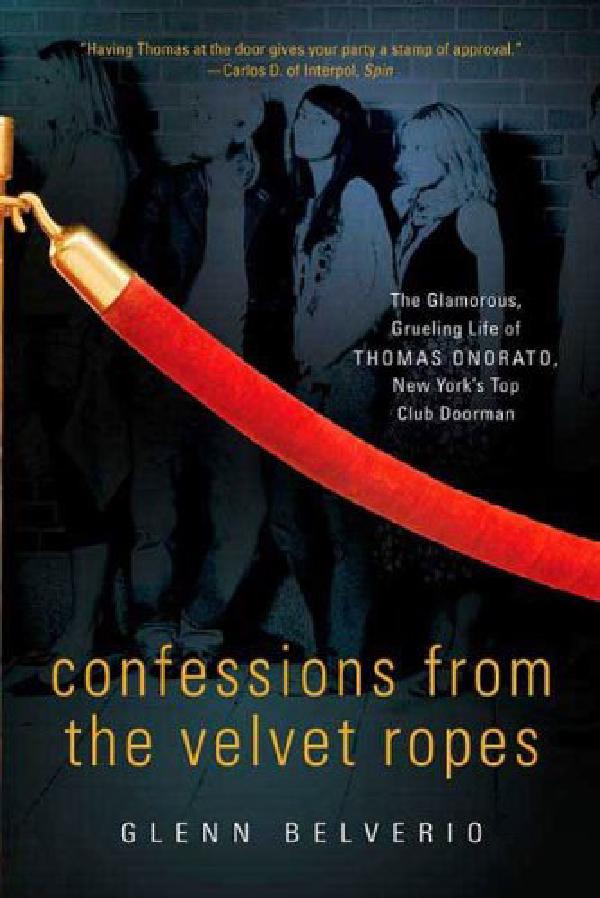 New York’s top doorman, Thomas Onorato, raises the ropes and gives readers a sneak peak into some of the world’s most exclusive parties.

“If you are not on the guest list or if I don’t know you or if I don’t like you, you are NOT GETTING INTO THIS PARTY!”
The doorman. The gatekeeper of the night. These silent observers see it all and yet say nothing. Until now. In Confessions from the Velvet Ropes, New York’s top club doorman, Thomas Onorato, lifts the ropes and lets ordinary readers into this exciting world. The book is an entertaining and hilarious collection of tales from the worlds of nightlife, fashion shows and celebrity parties. Highlights include: The night Madonna DJed at an intimate downtown club, Courtney Love’s surprise concert that ended in her arrest, the crazed stalker who attacked Pulp’s Jarvis Cocker, the aerial attack on Adrien Brody’s birthday party, Diddy’s surprise appearance at an electro-punk event and more. Onorato was always on hand and brings his insider info and nightlife wisdom to readers of Confessions from the Velvet Ropes. Combining elements of juicy gossip columns, rock star fan memoirs and nightlife social studies, Confessions from the Velvet Ropes is a tell-all with style, including humorous side-bars and tips on how readers might make it past the velvet ropes.