Fair Game: My Life as a Spy, My Betrayal by the White House by Valerie Plame Wilson 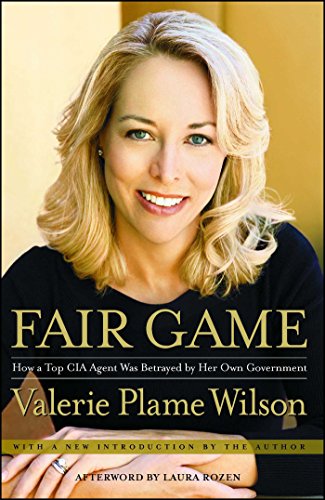 On July 6, 2003, four months after the United States invaded Iraq, former ambassador Joseph Wilson’s now historic op-ed, “What I Didn’t Find in Africa,” appeared in The New York Times. A week later, conservative pundit Robert Novak revealed in his newspaper column that Ambassador Wilson’s wife, Valerie Plame Wilson, was a CIA operative. The public disclosure of that secret information spurred a federal investigation and led to the trial and conviction of Vice President Dick Cheney’s chief of staff, Scooter Libby, and the Wilsons' civil suit against top officials of the Bush administration. Much has been written about the “Valerie Plame” story, but Valerie herself has been silent, until now. Some of what has been reported about her has been frighteningly accurate, serving as a pungent reminder to the Wilsons that their lives are no longer private. And some has been completely false – distorted characterizations of Valerie and her husband and their shared integrity.

Valerie Wilson retired from the CIA in January 2006, and now, not only as a citizen but as a wife and mother, the daughter of an Air Force colonel, and the sister of a U.S. marine, she sets the record straight, providing an extraordinary account of her training and experiences, and answers many questions that have been asked about her covert status, her responsibilities, and her life. As readers will see, the CIA still deems much of the detail of Valerie’s story to be classified. As a service to readers, an afterword by national security reporter Laura Rozen provides a context for Valerie’s own story.

Fair Game is the historic and unvarnished account of the personal and international consequences of speaking truth to power.