Gang Leader for a Day: A Rogue Sociologist Takes to the Streets by Sudhir Venkatesh 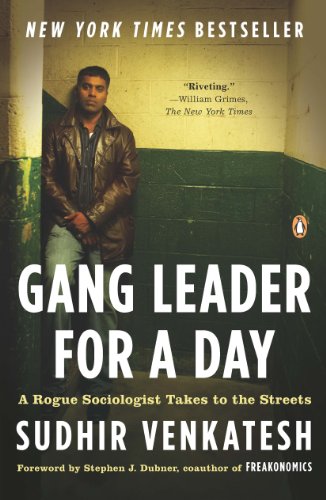 The story of the young sociologist who studied a Chicago crack-dealing gang from the inside captured the world’s attention when it was first described in Freakonomics. Gang Leader for a Day is the fascinating full story of how Sudhir Venkatesh managed to gain entrée into the gang, what he learned, and how his method revolutionized the academic establishment.

When Venkatesh walked into an abandoned building in one of Chicago’s most notorious housing projects, he was looking for people to take a multiple-choice survey on urban poverty. A first-year grad student, he would befriend a gang leader named JT and spend the better part of the next decade inside the projects under JT’s protection, documenting what he saw there.

Over the next seven years, Venkatesh observed JT and the rest of the gang as they operated their crack selling business, conducted PR within their community, and rose up or fell within the ranks of the gang’s complex organizational structure.

Gang Leader for a Day is an inside view into the morally ambiguous, highly intricate, often corrupt struggle to survive in an urban war zone. It is also the story of a complicated friendship between two young and ambitious men, a universe apart.