Red Notice: A True Story of High Finance, Murder, and One Man's Fight for Justice by Bill Browder

Finished reading this book on November 1, 2015 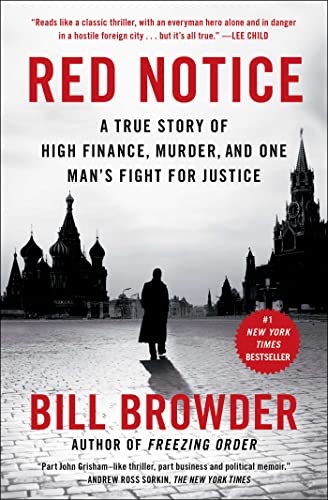 A real-life political thriller about an American financier in the Wild East of Russia, the murder of his principled young tax attorney, and his dangerous mission to expose the Kremlin’s corruption.

Bill Browder’s journey started on the South Side of Chicago and moved through Stanford Business School to the dog-eat-dog world of hedge fund investing in the 1990s. It continued in Moscow, where Browder made his fortune heading the largest investment fund in Russia after the Soviet Union’s collapse. But when he exposed the corrupt oligarchs who were robbing the companies in which he was investing, Vladimir Putin turned on him and, in 2005, had him expelled from Russia.

In 2007, a group of law enforcement officers raided Browder’s offices in Moscow and stole $230 million of taxes that his fund’s companies had paid to the Russian government. Browder’s attorney Sergei Magnitsky investigated the incident and uncovered a sprawling criminal enterprise. A month after Sergei testified against the officials involved, he was arrested and thrown into pre-trial detention, where he was tortured for a year. On November 16, 2009, he was led to an isolation chamber, handcuffed to a bedrail, and beaten to death by eight guards in full riot gear.

Browder glimpsed the heart of darkness, and it transformed his life: he embarked on an unrelenting quest for justice in Sergei’s name, exposing the towering cover-up that leads right up to Putin. A financial caper, a crime thriller, and a political crusade, Red Notice is the story of one man taking on overpowering odds to change the world.