The World is Flat: A Brief History of the Twenty-First Century by Thomas L. Friedman 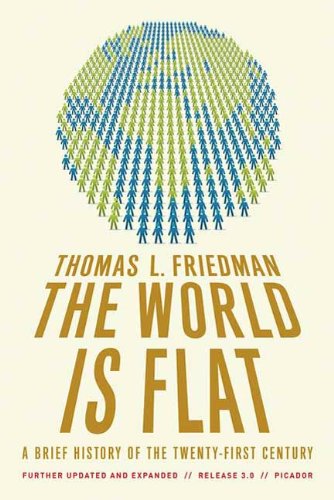 Updated Edition: Thomas L. Friedman is not so much a futurist, which he is sometimes called, as a presentist. His aim in The World Is Flat, as in his earlier, influential Lexus and the Olive Tree, is not to give you a speculative preview of the wonders that are sure to come in your lifetime, but rather to get you caught up on the wonders that are already here. The world isn’t going to be flat, it is flat, which gives Friedman’s breathless narrative much of its urgency, and which also saves it from the Epcot-style polyester sheen that futurists–the optimistic ones at least–are inevitably prey to. What Friedman means by “flat” is “connected”: the lowering of trade and political barriers and the exponential technical advances of the digital revolution that have made it possible to do business, or almost anything else, instantaneously with billions of other people across the planet. This in itself should not be news to anyone. But the news that Friedman has to deliver is that just when we stopped paying attention to these developments–when the dot-com bust turned interest away from the business and technology pages and when 9/11 and the Iraq War turned all eyes toward the Middle East–is when they actually began to accelerate. Globalization 3.0, as he calls it, is driven not by major corporations or giant trade organizations like the World Bank, but by individuals: desktop freelancers and innovative startups all over the world (but especially in India and China) who can compete–and win–not just for low-wage manufacturing and information labor but, increasingly, for the highest-end research and design work as well. (He doesn’t forget the “mutant supply chains” like Al-Qaeda that let the small act big in more destructive ways.)

Friedman has embraced this flat world in his own work, continuing to report on his story after his book’s release and releasing an unprecedented hardcover update of the book a year later with 100 pages of revised and expanded material. What’s changed in a year? Some of the sections that opened eyes in the first edition–on China and India, for example, and the global supply chain–are largely unaltered. Instead, Friedman has more to say about what he now calls “uploading,” the direct-from-the-bottom creation of culture, knowledge, and innovation through blogging, podcasts, and open-source software. And in response to the pleas of many of his readers about how to survive the new flat world, he makes specific recommendations about the technical and creative training he thinks will be required to compete in the “New Middle” class. As before, Friedman tells his story with the catchy slogans and globe-hopping anecdotes that readers of his earlier books and his New York Times columns know well, and he holds to a stern sort of optimism. He wants to tell you how exciting this new world is, but he also wants you to know you’re going to be trampled if you don’t keep up with it. A year later, one can sense his rising impatience that our popular culture, and our political leaders, are not helping us keep pace. –Tom Nissley